The Appointment (By Tiff)

By the time the first appointment came around I was so nervous and excited! I found an amazing doctor and felt comfortable as soon as we stepped into the office. There were countless awards plastered all over and he seemed genuinely nice and kept it real. Before we did the ultrasound he explained that this ultrasound was to check for viability- that even though the pregnancy tests were positive, we wouldn’t know what was going on inside until we actually looked. I really appreciated the honesty. He asked me a few questions and then we finally caught a glimpse at the life growing inside me.

We saw our little pearl. It looked nothing more than a little white circle ring. I remember the warm feeling I felt I had knowing that the pregnancy was real and knowing that we created this little miracle. But then I remember the feeling of having it all drained out of me. The doctor explained that there should be a heartbeat by now. I held back the tears. 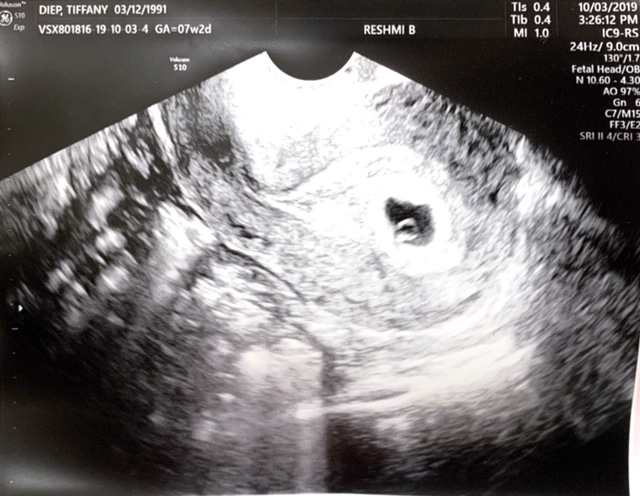 Based on the gestational age calculated by my last pregnancy, we should’ve been able to see more development. According to the ultrasound, the baby either stopped developing about 2 weeks prior or the gestational age was incorrect because of my irregular period. He explained that many women have a miscarriages early on and don’t even realize it and it’s extremely common. We talked about signs of a miscarriage and he told us to look up the closest hospitals in case I started bleeding.

All that was running through my head is how sick I’ve been. If I didn’t get the GI bug or the upper respiratory infection would things be different? It would make sense if I miscarried considering how terrible I was feeling. But at the same time I missed my period two months ago. Maybe the dates were just off? These thoughts would continue on for the next 10 days until the next ultrasound. We made a plan to get labs drawn, return a few days later to redraw a second set of labs and see if my hormone levels continued to trend up. Then I would follow up with him again for a second viability ultrasound where we would know for sure if it was a miscarriage or else we’d hear a heartbeat.

It was unspoken how we were both feeling. I didn’t need to say anything and I knew Corey was feeling it too. It was so shocking that two weeks ago this baby was the furthest thing from our minds, and now we were devastated at the thought of losing this soul that wasn’t even fully there yet. All we wanted was to know that it was okay. We were always waiting for that perfect time to start a family- when the loans are paid off, when we have a house and yard, when work is nice and cushy… None of that mattered anymore. All we wanted was for this little one to be healthy and we would make things work. And that was the turning point for the both of us. We felt so ready but we didn’t know if the universe was ready.

Writing about our first child.