My News (By Tiff)

I was convinced I had giardia. Who knows… maybe I did. Exactly two weeks earlier Taylor and I had our first mountaineering experience in Big Pine. We spent the weekend trying to summit Mt. Sill, but reached a point of total exhaustion after trying to navigate through a moraine and giant suncups. At some point during our adventure we had given up on trying to filter water. It was freezing cold, my filter was occluded, and hers was sluggish. We figured we could deal with the possibility of giardia in 2-3 weeks or dehydration on that damn mountain. We chose to just drink that oh so refreshing glacier water.

Well exactly two weeks later I started to feel nauseous and started having terrible diarrhea. It was BAD! I tried to let it run its course in case it was my IBS or a GI bug, but after two full days of the runs I finally decided to get antibiotics. The next morning I went to the pharmacy and dropped off my prescription. They told me it’ll take 20 minutes so I walked around Rite Aid trying to kill time. I ended up passing by the aisle with pregnancy tests and decided to pick up a pack. I wasn’t technically late yet. I was due to get my period any day now, but I also wouldn’t be surprised if I was late. It was just 2 months prior that I went to Elbrus and completely missed my period because of the physical stress my body was under. Either way, the nurse in me told me to get the tests anyways since I’d be starting a new medication.

So I go home and pee on the stick and set it aside for a few minutes. A few minutes later I check on it and see the faintest second line. I don’t remember what I thought next but I remember the panic. Corey was working from home and I just scream “BABE!!!” He came rushing in and remember asking him, “what do you see here?!?!” pointing to where the second line is. I wasn’t sure if I was imagining it or if it was really there… He said “I see an outline of a line.” I replied “An outline of a line is a line! Its positive!” 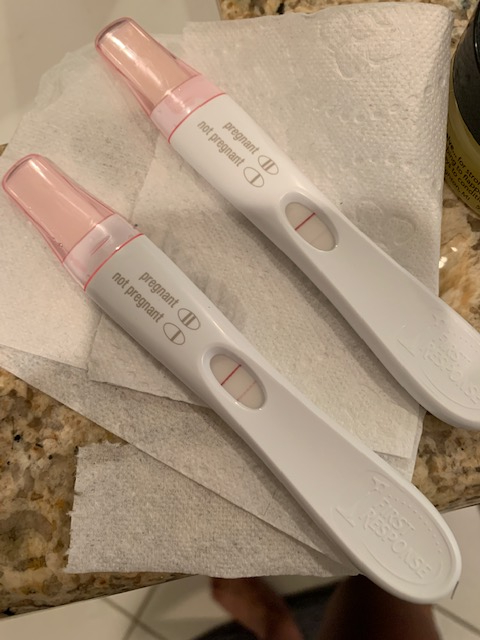 I still didn’t believe it. I had been extremely sick and was probably dehydrated. Maybe that somehow affected the test? I had bought a 2 pack of tests so a few hours later I took another one. It was definitely a positive test this time! Even then, I still wasn’t sold. Maybe I bought a defective lot. The next morning I bought a whole different brand of tests. As soon as my pee touched the test it turned positive. There was no doubt I was pregnant!

We’ve always known we’ve wanted kids with each other. There was never any question about that. I’d jokingly tell Corey that I want one now, but he always said he wasn’t ready. He’d spent his entire time as a young adult worrying about his younger brothers and trying his best to balance being their caretaker while incubating to make progress with his career aspirations. It felt impossible to do both, but now his brothers are older and we finally reached a point where it seemed like we can really focus on our careers and our passions. I mainly worried about how he would take it. To be honest, we were both in a state of shock those few days just trying to process through what this would mean. This was the phase where he would cycle through feeling like “this is amazing!” and “my life is over!” And as a result I cycled through moments of elation and sadness. I’ve always loved the idea of being a mom but hated the idea of being with someone who didn’t feel the same. I shared the news with a few friends, my brother, and made our first OB appointment for about 1.5 weeks later. That week or so felt like an eternity. I had gotten over the GI bug and come down with an upper respiratory infection. Urgent care didn’t feel comfortable prescribing any medications, so I just waited for my OB appointment. Without a doubt I was starting to feel the exhaustion and nausea from pregnancy too. I spent 24⁄7 in bed frustrated that my body was feeling so ill and scared for this little one that was trying to develop.